The 80 years of Québec women’s right to vote 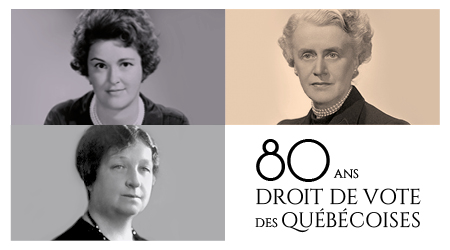 On the anniversary of this event, Élections Québec wishes to highlight the efforts of some inspiring women who fought for these rights and several dates marking the progress of women in politics.

April 25, 1940 – Winning the right to vote and run for office in elections

With the support of Québec Premier Joseph-Adélard Godbout, Bill 18 was passed on April 18, 1940 in a 67 to 9 vote. Then on April 25, 1940, the lieutenant-governor gave assent to the Act granting to women the right to vote and to be eligible as candidates.

“Vote for liberation and open the doors of the political arena to Québec women who will be able to partake in provincial life with as much dignity as in federal life where women have participated for over 20 years.” [translation]

Idola St-Jean speaking before the members of the National Assembly in 1939. 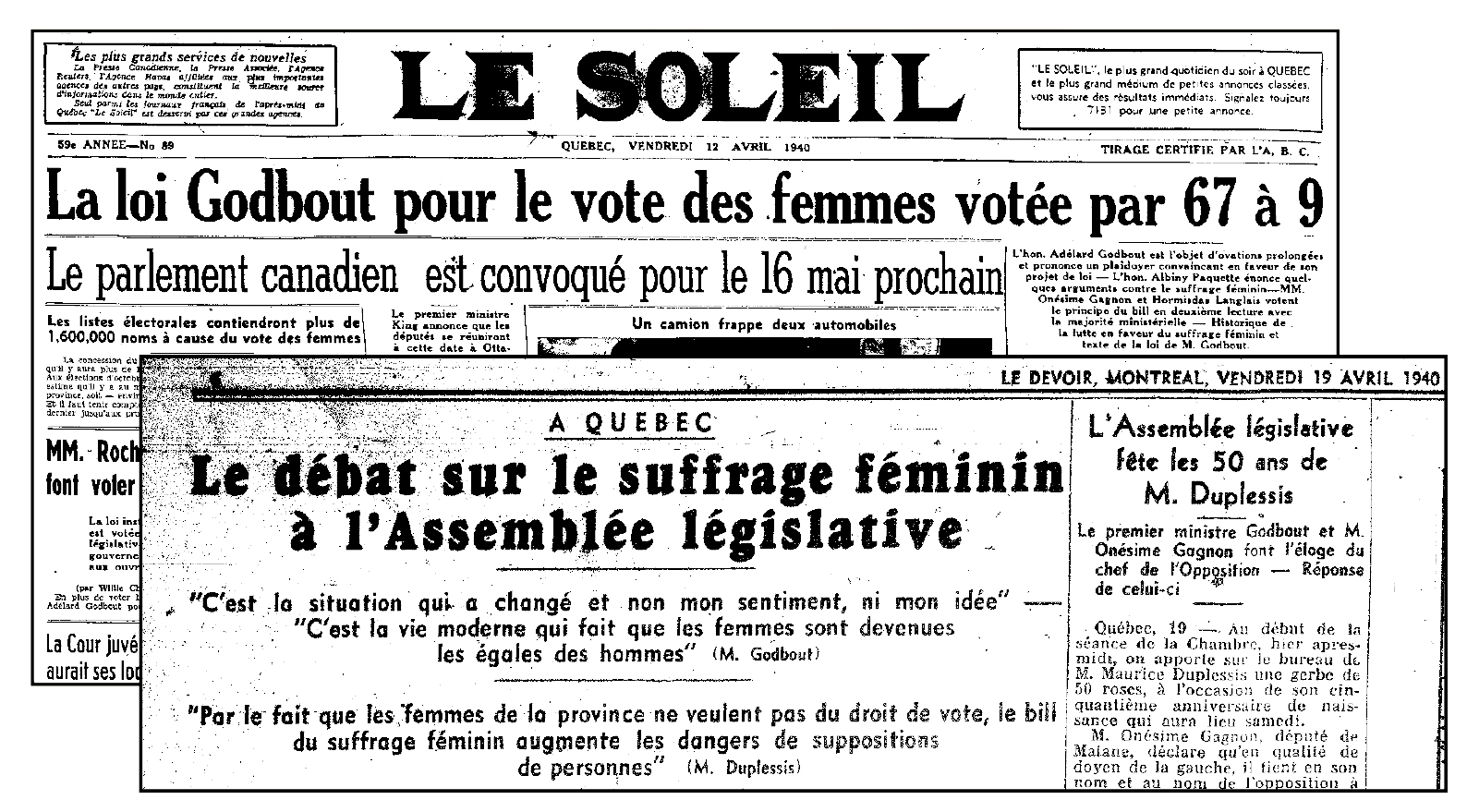 Marie Lacoste-Gérin-Lajoie and Thérèse Casgrain are two of the pioneers who fought for these rights.

In 1922, Marie Lacoste-Gérin-Lajoie was one of the founders of the Comité provincial pour le suffrage féminin (provincial suffrage committee). The following year, she led a delegation of 400 woman activists who went to Québec City to demand the right to vote and run in elections. It’s also in large part thanks to her that the National Assembly amended the Québec Civil Code in 1931 giving married women full control over their own assets and salary. Source: Par ici la démocratie. 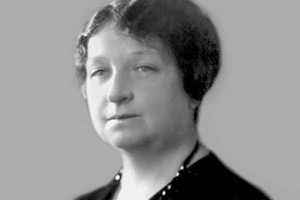 A member of the liberal women’s club, Thérèse Casgrain convinced Adélard Godbout in 1938 to invite 40 women to the Liberal Party convention. She succeeded in having women’s suffrage included in the party program. Then in 1940, she encouraged Adélard Godbout, the new premier, to stand up to the cardinal who continued to oppose the adoption of this measure. Thérèse Casgrain then took the leap into active politics. Despite not being elected in either federal or provincial elections, she became the first woman in Canada to lead a political party, namely the Parti social-démocrate (1951-1957). Source: Par ici la démocratie.

Women in Québec were able to vote for the first time in the provincial general election on August 8, 1944.

Even though women had also won the right to be candidates in elections in 1940, no woman ran for office in the 1944 general election. There were a number of obstacles still in the way of women’s participation in politics: “If there weren’t many women candidates, it was because women were more often in electoral divisions where the election was lost in advance and their election expenses if they didn’t win enough votes were too onerous for their meager financial resources” [translation]. Source: Denyse Baillargeon, Repenser la nation. L’histoire du suffrage féminin au Québec, Montréal, Les éditions du Remue-Ménage, 2019, 235 pages.

“Ballot paper from a by-election held on July 23, 1947 in the electoral division of Huntingdon. For the first time, a woman was a candidate in a Québec election. Mae Leehy O’Connor was a candidate to succeed her husband Dennis James O’Connor, who had died while in office in 1946. John Gillies Rennie won the election with a 727 vote lead over Mae O’Connor.” [translation]

December 14, 1961 – Election of Marie-Claire Kirkland in a by-election

In 1961, Marie-Claire Kirkland, a candidate in the Jacques-Cartier electoral division, was the first woman in the history of Québec to be elected to the Québec parliament. On December 5, 1962, she became a minister in the cabinet of Jean Lesage. In this capacity, Marie-Claire Kirkland was responsible for a major reform of the Québec Civil Code in 1964 putting an end to the legal incapacity of women. From then on, women could exercise a profession, manage their own property, institute lawsuits and enter into contracts, including signing a lease for a dwelling. Just before leaving active politics, she tabled the bill establishing the Conseil du statut de la femme, en 1973. Source: Par ici la démocratie. November 15, 1976 – General election where more that one women was elected to the National Assembly

Despite the law adopted in 1940, women did not have a significant presence in the National Assembly until the 1980s. The 1976 general election was the first in which more than one woman was elected to the National Assembly. There were now five women MNAs, a number than increased to eight in the election of 1981. It wasn’t until 1985 that the number of women elected was greater than ten.

Pauline Marois was elected in the Charlevoix−Côte-de-Beaupré division in the general election of September 4, 2012, becoming Québec’s first woman premier and joining a short list of Canadian women to hold the position of premier or prime minister. In the general election on October 1, 2018, the number of female candidates reached 40% for the first time. When the election was over, 42% of the candidates elected were women.

To find out more

See a summary table of general election results since 1867, highlighting the number of women candidates elected in each election. Also read the section on our Website devoted to the Right of Québec women to vote and stand for office..

Stay up to date

Subscribe to our newsletter to receive our latest news and press releases by email.